Email sent by David Sproule:
I got your email from the Royal Regt of Canada website. My Dad was a Toronto boy and  member of the Machine Gun Corps in WW1 joining up in1915. Although he died in 1977 it is only recently that I have been going through  his letters home. In one I found the attached poem which I thought might be of interest to your members and your Museum and archives. I can send it along if you like.
My Dad’s twin brothers both served in the 3rd  Bn QOR of C and both were KIA one in April ’15 and the other in July ’16. My older brother was a major in the QYRangers. I  now live in Vancouver and served for 18 years in the RCD and LdSH ad as many in the militia finishing up with the BCR’s in Vancouver.
Best regards,
David Sproule
Poem: 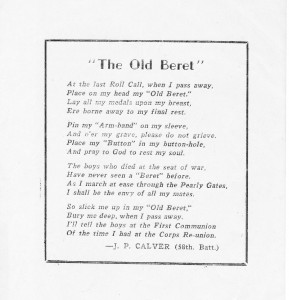