A follow up for Val Flynn who was nominated and received the Veterans Affairs Commendation in June 2016.

Linking employees and pensioners with more TTC headlines and stories at TheCoupler.ca.

Valorie Flynn is congratulated by retired General Walt Natyncyk for her dedication to veterans.

“Words cannot explain the joy I have when I’m with them,” says Storeperson Valorie Flynn. She’s referring to Canadian veterans and serving them has earned her the Minister of Veterans Affairs Commendation. Flynn was one of handful of Ontario residents who were honoured for their care and dedication to Canada’s veterans on June 16.

“I was really surprised to be nominated and then receive the Commendation. There is nothing that makes me happier than to see the beautiful smiles on the veterans’ faces when I take them out for a day or overnight,” Flynn says.

The Veterans Affairs’ citation is a glowing tribute to the care, compassion and respect Flynn demonstrates for veterans through an extraordinary amount of volunteer time. She is a Life Member of the Royal Regiment of Canada Association since 2009, where she is a cadet liaison with the 2736 Cadet Corps. As a Director, Flynn has been involved with the Veterans Concerns Committee, which was recently developed and organized to serve veterans.

At Sunnybrook Hospital, Flynn promotes quality of life by ensuring veterans are involved in hobbies. She also assists with day trips to various events, such as the regimental ceremonial parades and the CNE’s Warriors’ Day. Flynn volunteers at Sunnybrook’s Blythwood Social Club by serving food and refreshments to veterans.

She’s very active with the Royal Canadian Legion, serving as Service Officer of Branch 266/46, where she ensures veterans are receiving the benefits they’re entitled to during home visits or visits at the branch. She also helps veterans determine and apply for eligible medals. Flynn also assists at many legion events, including poppy drives.

“I have been getting our cadets involved with the older veterans serving them their Christmas and Easter lunches at the legion. I will always take pride in whatever I’m doing with any veteran both young and old,” she says. It’s in tribute to my mother, and all her brothers, who were in the military serving in WWII during their young lives. Some made it back and some didn’t.”

The Minister of Veterans Affairs Commendation was established in 2001 by warrant of the Governor General and with the approval of Queen Elizabeth II. 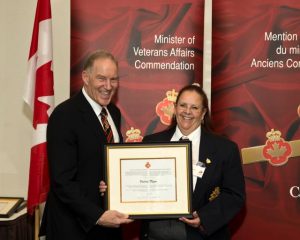