The Royal Regiment of Canada is an Army Reserve infantry unit based at Fort York Armoury in Toronto, Ontario. The role of the Army Reserve (historically known as the Militia) is to produce well trained soldiers to augment operations of the Canadian Forces in Canada and abroad. Beyond this, the Reserve maintains a base for general mobilization and embodies the connection of the Canadian Army to communities across the country. The unit is prepared to respond, as part of the Toronto-area brigade, to any emergency or natural disaster in the region.

Reservists are part-time soldiers.  All of them attend school or hold civilian employment in addition to their military duties.  After receiving their basic training and the additional specialized courses that qualify them as infantry soldiers,  the Regiment trains a minimum of one night each week and one weekend each month.   There are opportunities to attend further training courses during the year.

The infantry fight on foot.  As the Army’s primary war-fighters and the core of the combat arms team, their role is to close with and destroy the enemy.   Equipped with small arms weapons, and anti-tank weapons, the infantry operate in any environment in the world – in the Arctic, in mountains, jungle, and desert or in city streets and in any type of weather. They often deploy by helicopter.

The Royal Regiment of Canada is equipped with pistols, the C7 rifle, the C9 light machine gun,  the C6 medium machine gun, the 60mm mortar, the M72 rocket launcher, the Carl Gustav 84mm anti-armour weapon, and hand grenades.  The Regiment’s soldiers are also trained in the use of various sophisticated communications, navigation, and night-vision equipment.  They are also trained and equipped to protect themselves against the use of chemical, biological, radiation and nuclear threats.

Members of The Royal Regiment of Canada have served on peacekeeping missions throughout the world including Cyprus, The Congo, Eritrea, Haiti, Kosovo, Bosnia, Namibia, The Golan Heights, and Sierra Leone.  Members of the Regiment have served in Afghanistan, and the Sudan.

The Royal Regiment of Canada is an infantry unit, part of Canada’s Army Reserve. It was formed in 1936 as the result of the amalgamation of two famed reserve units, The Royal Grenadiers, and the Toronto Regiment.   Located in Toronto Ontario, it is one of the oldest army regiments in the Canadian Forces and traces its roots to 1862 when a regiment of volunteers was formed and named the 10th Battalion of the Royal Grenadiers.  In response to a perceived threat of an American invasion, the Regiment was first called out in June 1866.  It marched to Fort Erie, Ontario to meet the Fenian-Americans who were threatening to invade Canada from the south.  The Fenians withdrew before the Regiment arrived and the Regiment reverted to its part-time reserve status.

The Regiment was again called out by the Federal government to help quell the Metis insurgents during the Northwest Rebellion of 1885.  After an arduous and punishing 1300 kilometre westward march during a harsh winter, it arrived at Batoche, Saskatchewan where it led a bayonet charge that captured the Metis leader Louis Riel. The Rebellion ended, and after a trial, Riel was hanged for treason.  Over a century later, Riel is now honoured as a Father of Confederation and Manitoba has declared a public holiday in his honour.

During the First World War, the Royal Grenadiers were re-named as the 58th and 123rd Battalions of the Canadian Expeditionary Force.  The Regiment fought in the trenches of Europe from 1916 to the end of the war in 1918.

The Toronto Regiment was raised to fight in the First World War.  Renamed the 3rd Battalion, it entered the trenches in 1914 and fought in many major battles until the end of the war.  One of its members was awarded the Victoria Cross, the highest award for valour.

The two regiments were awarded 22 battle honours to recognize their skill, bravery and sacrifice.

The Toronto Regiment and Royal Grenadiers were amalgamated and renamed The Royal Regiment of Canada in 1936.  Three years later, the Regiment was again called to active duty for service in the Second World War.  After participating in the disastrous Dieppe Raid in 1942, the unit was reconstituted and landed in France shortly after D-Day.  It fought its way across France, Belgium, the Netherlands and into Germany earning another 20 battle honours.

The Regiment reverted to its reserve status after the war.  Presently, it is composed of fully trained reserve soldiers who have served on peacekeeping missions throughout the world including Cyprus, The Congo, Eritrea, Haiti, Kosovo, Bosnia, Namibia, The Golan Heights, and Sierra Leone.  Members of the regiment have recently served in Afghanistan, and the Sudan. 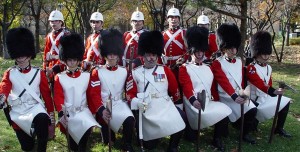 In 1965, the Regiment decided to commemorate its roots by creating a ceremonial drill team that was trained in 19th century drill manoeuvres and outfitted with authentic 1875 uniforms and equipment.

In the late 1800s, sub-units of regiments of the Canadian Army were designated as Pioneer Platoons.  Their task was to do the labourious backbreaking work that was required to keep an army mobile and protected. Although the work was of great importance, it was unglamorous and difficult and often used as a punishment detail.

The Pioneer Platoons performed basic Field Engineering tasks such as road building, trench digging, and carpentry. They were also trained in the use of dangerous explosives.  Because they often worked far in advance of the main body of the Regiment, they were provided an escort of additional troops who served as their protection against the enemy.

The Pioneer Platoon wears the uniform of the 1875 era, and carries authentic weapons and tools of that time.   The Pioneers wear the scarlet tunic of the Royal Grenadiers with a white leather apron to protect it from the harsh work that was being performed. The soldiers also wear heavy leather gauntlets, and gaiters to protect their hands and legs.  They are equipped with the tools of their trade which include axes, picks, and saws.

The grenadiers that accompany the pioneers wear the standard uniform of a soldier of the 1875 Royal Grenadiers.  They wear the same scarlet tunic, and navy-blue pants, white pith helmet, back pack, water bottle, food sack, and rifle and bayonet.  They flawlessly and accurately perform the manoeuvres and rifle drill that was used at the time.

Because the Pioneer Platoons of 1875 were considered to be a punishment detail, they were often staffed by the troublemakers and hooligans of the regiment and no self-respecting officer and gentleman of the 19th century would be associated with them.  Consequently, they were supervised and led by sergeants and corporals.  As a concession to their hard work, they were allowed to grow beards.  Today, the members of the Pioneer Platoon of The Royal Regiment of Canada are considered to be an elite group of dedicated young soldiers who have an interest in history and tradition.

By the turn of the century, the Pioneer Platoons became obsolete as modern Combat Engineer Regiments were formed.  Modern Combat Engineers are a highly trained and skilled group of disciplined professional soldiers who perform dangerous work.  As a nod to their history, they are still permitted to wear beards.

The Pioneer Platoon of The Royal Regiment of Canada proudly leads the Regiment when it is on parade and has demonstrated its skill to thousands of Canadians since 1965.